Standby energy, or phantom load, refers to the energy consumption of appliances left idle or on standby. In addition to leaving the lights on in an empty room or falling asleep with the TV on, other examples of similar “energy vampire” include leaving a laptop plugged in and leaving a WiFi router plugged in overnight or while away at work.

A survey by Schneider Electric found that approximately 77 million appliances are left on standby every day. This means that Britons are essentially throwing away a whopping £227 million every year in standby energy alone. Optimizing to limit standby energy translates into potential savings of as much as £100 annually per household. 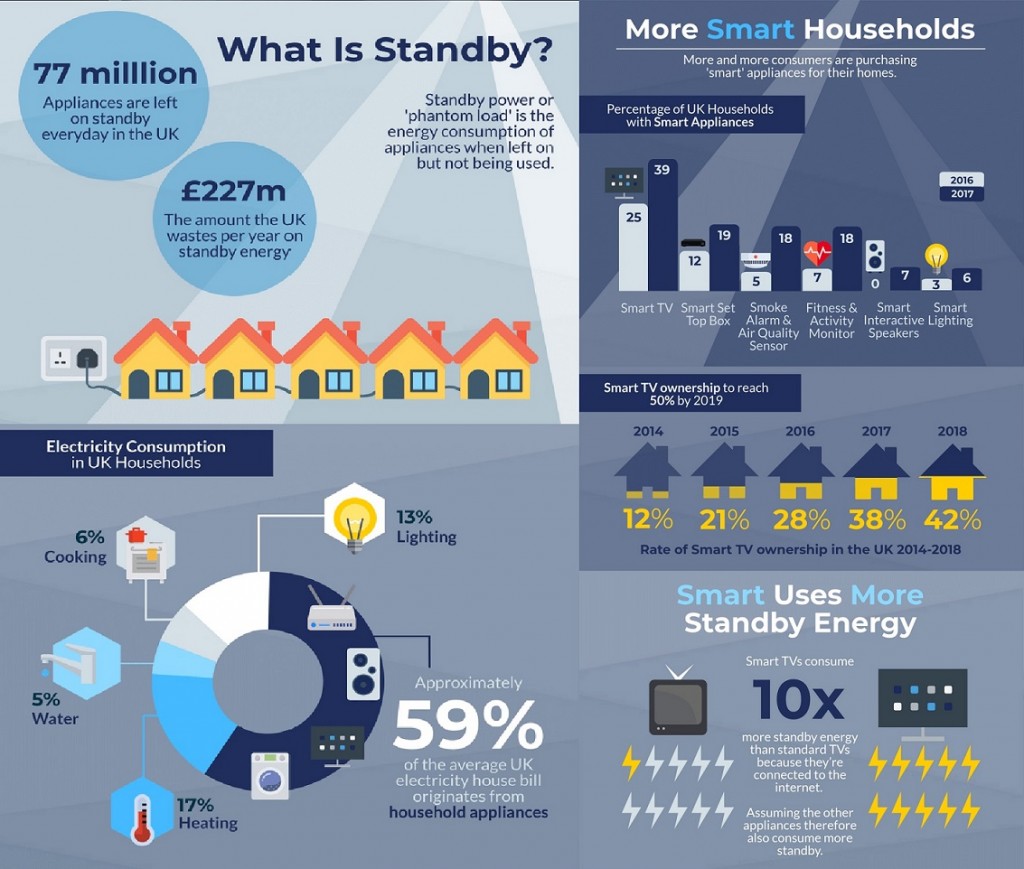 Unfortunately, almost half of Briton admit they’d rather continue to commit “energy sins”—and overpay in utility bills—than deal with the added annoyance of modifying their habits at home. Even more strikingly, of the total energy consumed by a phone charger, only 5 percent of it is actually used to charge the phone. The other 95 percent is simply wasted on standby energy.

To make matters worse, more and more households are replacing their low-tech appliances with smart devices. In 2014, for example, 12 percent of all the households in the UK owned a smart TV. Meanwhile, in 2018, the number has grown over threefold to 42 percent. The future appears to be “smart.” In fact, by 2021, it’s predicted that an average of 8.7 devices will exist in a typical smart home.

The reason for the significant difference in standby energy consumption between smart and “non-smart” devices has to do with all the extra features embedded in smart appliances. One power-hungry feature is the internet connection that smart appliances need more or less continuously. This means that the modem or router needs to be active or on standby for the entire time the smart appliances are in use or on standby.

The continuous connectivity of wireless routers has consequences. Evidence suggests that it can cost the average UK household approximately £22 a year under the condition that it’s never switched off. This is 20-25 percent of the total potential savings on standby energy consumption, making it one of the least economical devices in your home. Envisioning a future with close to nine devices in a typical smart home would make the router or modem an essential device to have.

The future is inevitably “smart” and calls for “smart” measures. For example, it’s possible to reduce your standby energy consumption by using smart energy meters, smart thermostats, and smart sockets. Even though purchasing smart appliances is a rising trend, only 21 percent of UK households owned a smart energy meter in 2017. The benefit of these products is that they give insights into your energy usage and optimize energy flow based on your daily routines. Such devices don’t solve the problem all at once, but it can help make the situation better. Infographic about Smart Ways not to fall prey to standby energy, but to Save Energy at Home. More and more British households adopt smart appliances, and current devices get replaced with connected appliances, the importance of understanding their consequences (e.g. increases in standby energy) also increases. As a consequence, we should do our best to ensure that our homes remain as energy efficient as possible installing the Internet metering system BALANCE.

More information about the metering system BALANCE at www.djv-com.org