When there is no money for the modernization of distribution networks, but there are large losses of energy resources, we convert the losses into live money.

Receiving the grant to reduce CO2 emissions – it pays for the installation of a BALANCE accounting system. References to the calculation of loss reduction in distribution networks of gas, electricity, water and heat.

Investing in reducing losses. An energy service contract is a form of contract aimed at saving operating costs by increasing energy efficiency. The costs of the investor are reimbursed at the expense of savings, after the introduction of energy-saving technologies.

The annual volume of water losses in Chisinau is about 33 million m3. Suppose on the backbone networks 11 million m3 are lost. Segmentation of the backbone network for 400-600 segments, that is for 20-30 objects / houses per segment and equipment of segments with meters and BALANCE system, will allow to identify and localize, based on the analysis of hourly night consumption data, permanent latent leaks that do not surface . This will remove half the losses, or about 5 million m3, see the report.

To reduce the second half of the main losses of 5 million m3, it is necessary to equip all common counters of the buildings with pulse output and the BALANCE accounting system. Based on the analysis of the imbalance and analytics of the BALANCE system, it is possible to identify all unauthorized connections, as well as defective common metering devices.

The use of the BALANCE accounting system for the on-line monitoring of 30 (15) minutes of balance on distribution networks to general metering devices, as well as monitoring of water pressure and the presence of voltage on pump motors in near real time, allows many times to reduce response time to emergency situations, localize the accident site and reduce losses on the backbone networks by another 10 million m3.

Equipment accounting system BALANCE apartment accounting devices, will allow to enter into direct contracts with consumers, reduce the amount of unallocated water on indoor networks through the detection of unauthorized connections, detect leaks, identify faulty meters and meters that have been subjected to interference. That will reduce losses in public networks by another 10 million m3.

The above measures give the water utility additional advantages:

– the amount sold to consumers is increasing.

The accounting system BALANCE allows similarly to electricity to introduce time tariffs for water. The introduction of day / night / peak tariffs makes it possible to reduce the pressure in the distribution networks due to a more even consumption of water by the time of day, and thus a) reduce the number of accidents by reducing the maximum pressure in the distribution networks, b) reduce the leakage which is proportional to the pressure, c) at the same average tariff, the profit will increase, as 25-35% of the cost of water is electricity, and its consumption at peak hours will fall by about half, which means that you can expect a 5-7% decrease in costs.

The next step is to make the minimum permissible pressure on the distribution grid. This allowed to reduce the average water volume by 5.8% and the night volume by 15% in the networks of the Brazilian firm Prolagos. The technology uses time, weather and consumption data to adjust the water pressure according to demand (MI2018-3p8). This reduces the accident rate on the networks, and also saves energy by reducing the power on the pumps. 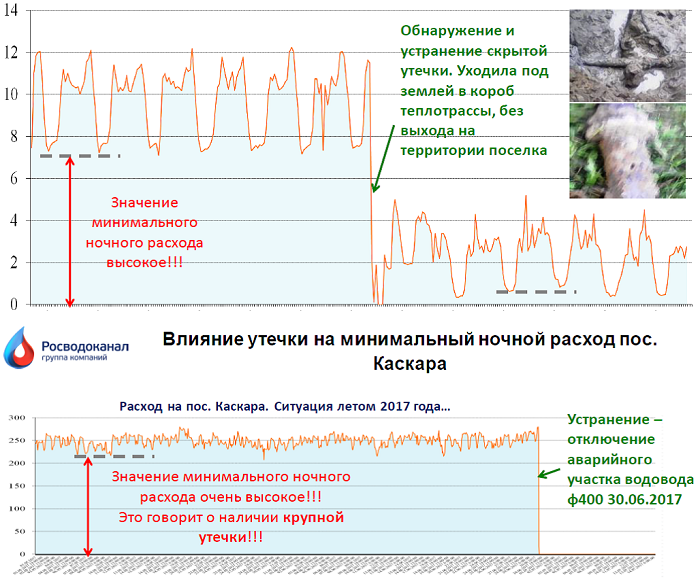 Most accounting systems are focused on the operation of the meter reading – billing for services. Attention to the operation of networks is almost not paid. At the same time, BALANCE pays for itself by reducing losses, detecting leaks not only at the consumer, but also in the common house and backbone networks. The localization of losses, the rapid identification of losses and accidents, the analyst for detecting leaks, unauthorized connections and faulty meters is the result of the work of the BALANCE accounting system.

More information about the BALANCE system is available at www.djv-com.org.