Data transmission networks over the air, must meet the conflicting requirements depending on the application. To address specific problems you need to determine: the structure of the data transmission network, a way to access the channel data transmission, frequency range, data rate, battery life, the number of devices supported by the network, the amount of data transferred, response time network, the method of configuring the network, the coexistence of several networks simultaneously.
We offer a stack of communication protocols D-Mesh and equipment for low-speed data networks. Operating frequency 315 MHz, 433MHz, 868MHz, 915MHz, 2,4 GHz does not require a license for their use.
Self-organizing network is built on similar components. Ratio of active / passive mode is not more than 1 / 1000. The number of levels of relay 30. Power Device Battery. Battery 2A * h enough to work for 6 years. Frequency sharing between the devices configured and can be from 3 to 25 s. Response time the network is proportional to the number of levels of the network. Supports transfer autodata once a day, queries the current data, emergency messages. More transmitted information enables us to construct the structure of the data network.

2. The structure of the data network.
Manufacturer DJV-COM has developed a network topology D-Mesh. This network topology supports all network devices. D-Mesh Topology is a kind of cluster tree topology (Figure 1). 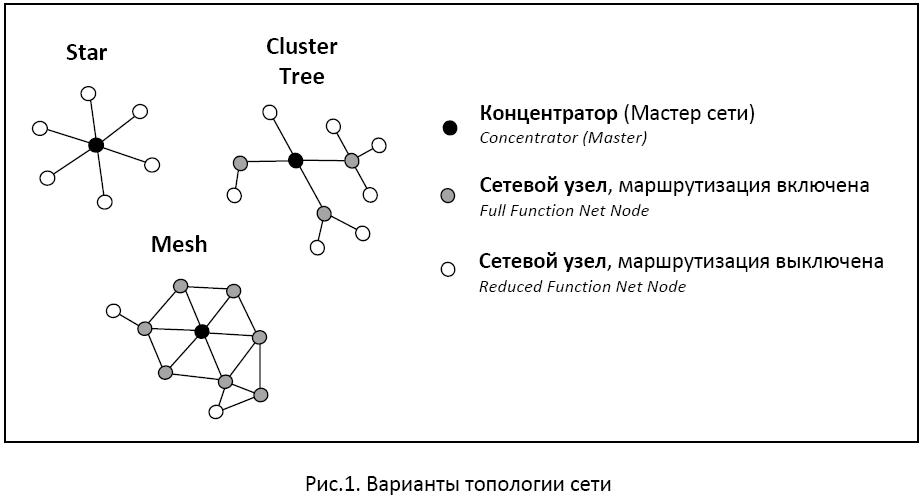 D-Mesh topology allows most efficient use of bandwidth, combining data transfer rate sufficient for the transfer of daily data and the reliability of the network.
D-Mesh is a dynamic network topology, which routes the data can fluctuate, but the network node is installed permanently. When you add or delete network node will be automatically reconfiguring the network.
Network topology D-Mesh consists of a network coordinator and two types of network nodes with and off the routing function (Figure 2):

The coordinator of the network performs the concentrator. This device is the highest level of network topology. It can communicate with any devices in its network.
Network node with the enabled routing. This device, which acts as an intermediary between the network devices to transmit data from remote devices from the network coordinator. Network node can be as the final recipient of data.
Network node with the routing function is disabled. This is the final device in the network topology D-Mesh is the source or final destination of data, but with disabling routing.
Each device D-Mesh network has its own unique address. 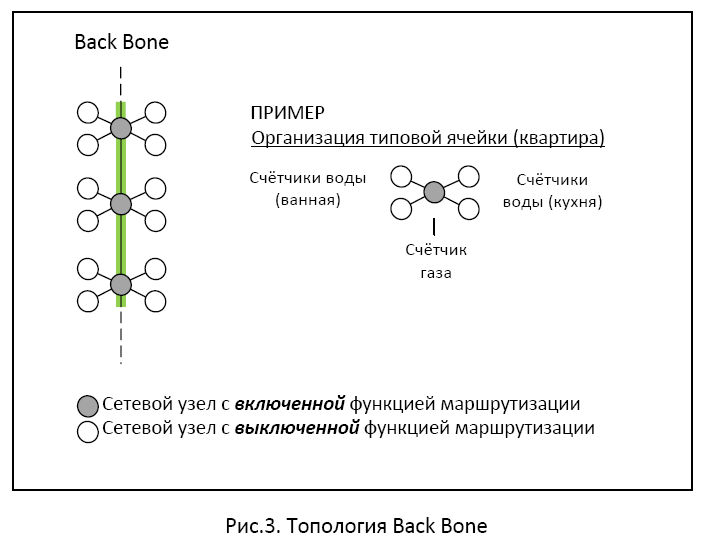 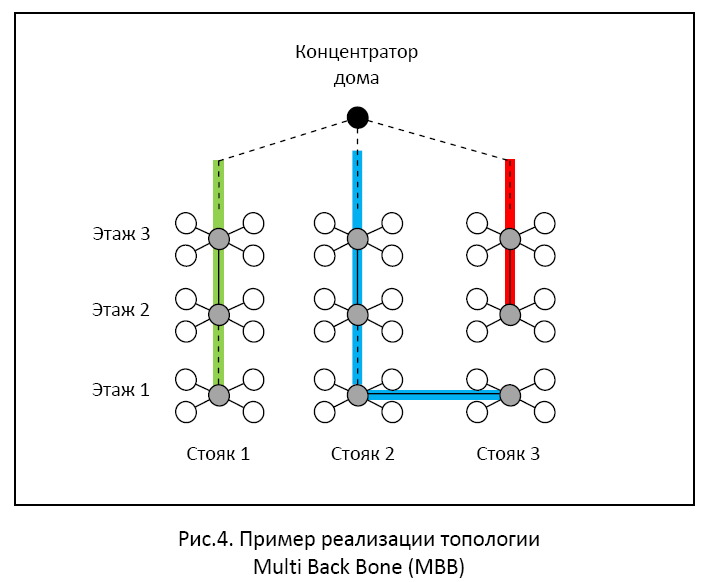 number of devices supported by one concentrator – can be increased by 4-6 times and brought to the numbers 1200 – 1500 points. If necessary, any network node with disable the routing, this feature can be activated remotely or locally.

4. Saving, or life of the battery.
We do not consider the network in which nodes in the network with routing functions require external ac/dc power supply. In this case, lost many of the advantages of networks with data transmission on the radio – is the cost and time of deployment of such networks. To ensure the life of batteries for 6 -10 years old, requires that the device is active and not more than 1 / 1000 of the total operating time. For example, as shown in Fig. 5 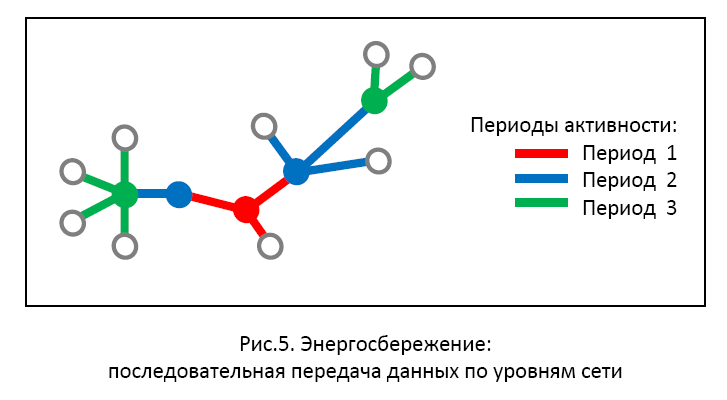 data transmission subnet level is consistent, i.e. at the same time, in an active state is a very small number of devices.

5. Load capacity bandwidth and reliability of the network.

An important parameter of the data network is the load capacity – the maximum possible number of data packets transmitted through a separate network node. So for D-Mesh network, each network node is able to pass a day at least 1500 data packets. Thus the data from the entire network – up to 1500 devices can be transferred to the coordinator through a single network node, which is the only link between the hub and the rest of the network.
Another important parameter is the reliability of its network operations. Fig. 6 shows an example of the dynamic changes of network topology depending on the load of communication channels. The red color indicated the device in which the communication channel is overloaded transmission of data, in green – a device in which the communication channel is free. The example shows that with time the devices are idle channels to transmit their data. Thus, the network structure depends not only on the conditions of hearing devices over the air, but also on the busy channels. 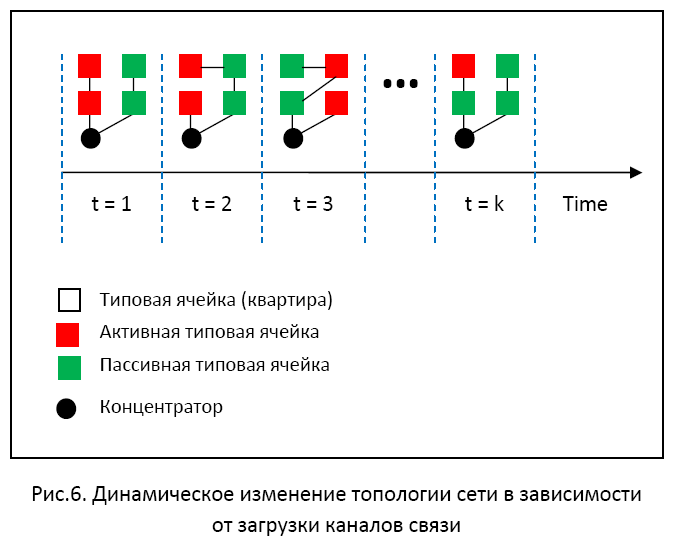 To maximize  the operating  frequency range,  the network topology, D-Mesh used temporal separation of  data and timing (Figure 7).
Work  all  devices D-Mesh  network is  synchronized  with  the  beacon  signal  (beacon).  This signal is emitted periodically Networking sites-enabled routing, which may be the masters for some groups of devices. Signal beacon contains  information about the number of  network-level,  network ID,  the  MAC – the address of the master of his formative as well  as a number of additional data.
Just behind the beacon signal to be working window (Local Frame), the duration of which  consists  of two main parts. The first part  is  devoted  to  the transfer of data packets incoming messages, the second – outgoing. Length  of  the working window is variable.

In the pauses between the signals of the beacon, with the following working for them, windows, network devices are in sleep mode. If a device does not have time to make the transmission / reception of data during one working window, the whole process is divided into several working windows. 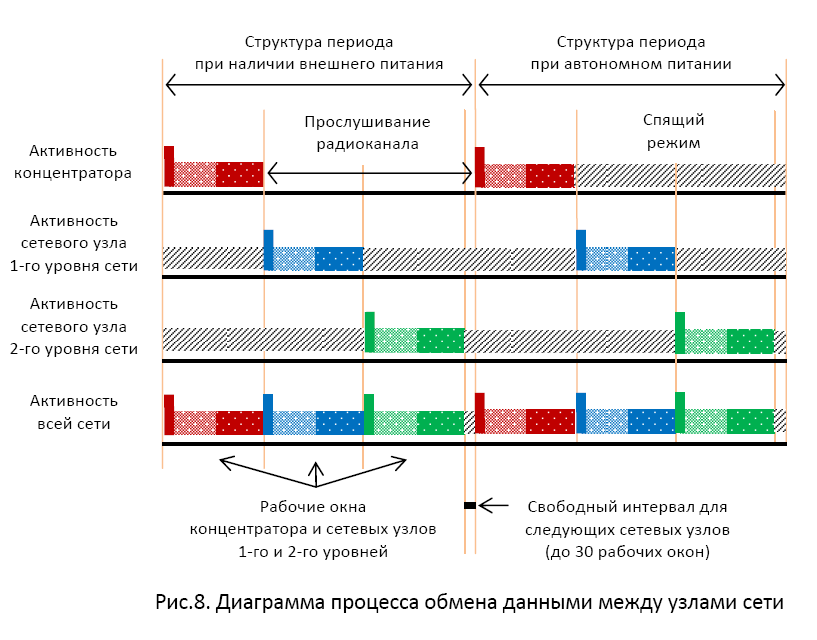 Network nodes can communicate with each other or with the coordinator of the network as the need arises in certain time intervals (Figure 8).
In the topology of D-Mesh implemented two modes of operation of the network. In the presence of an external power supply network coordinator is constantly active and able to exchange data with the highest possible speed. As coordinator of the signals separate parts of the network periodically wake up and exchange messages.
In the absence of external power supply network coordinator works in standalone mode and is powered by a battery backup unit. In this mode, the functioning of the entire network with the topology of D-Mesh is in sleep mode, including the coordinator. Data exchange occurs within the individual network segments, which are periodically wake up (Figure 5). Thus, it is possible not only to save electricity, but also to avoid the influence of individual network segments to each other.

7. Example topology of a running network.

As an example, the use of the D-Mesh give an example of a data collection system to integrate gas in high-rise building (Figure 9) at some point in time.
Hours and daily data generated in the form of a data packet and sent to the control center once per day. In this time of radios without replacement lithium batteries last up to 6 years.
A distinctive feature of the radios company DJV-COM is the possibility of organizing a complex network architecture, as well as the opportunity to cover the distance, as measured by several kilometers through the maintenance of up to 30 levels of retransmission. 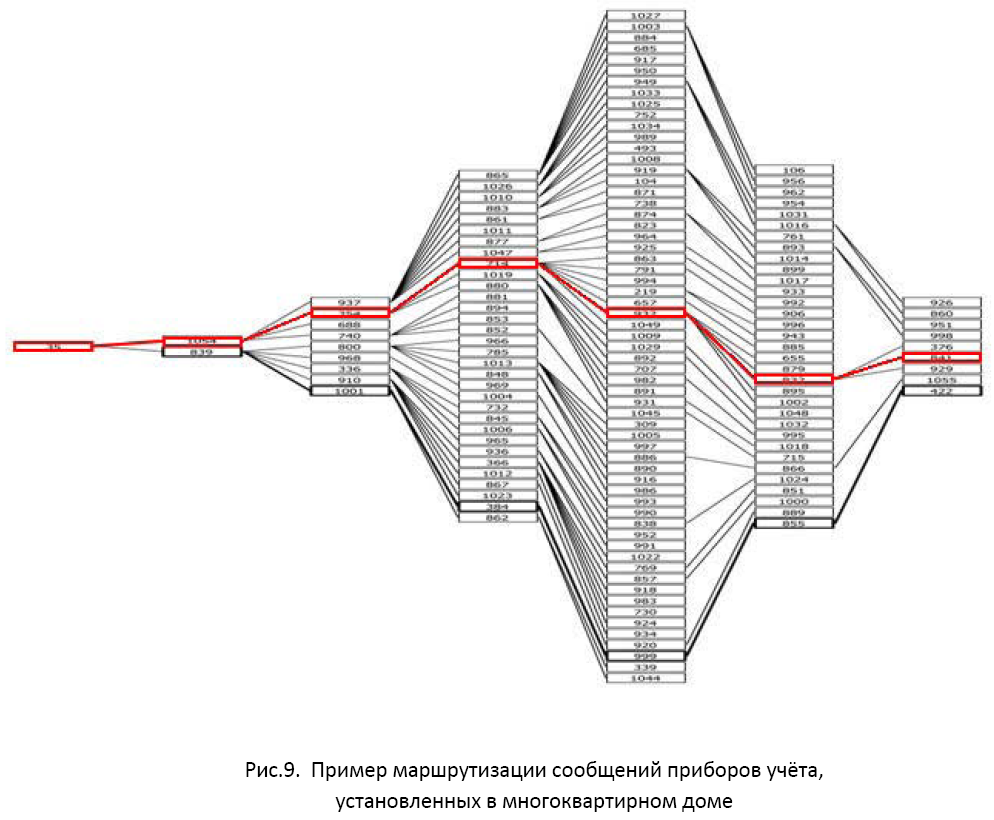 8. Simultaneous operation of overlapping of hearing radio networks.
When the mass installation of radio transmission raises the question of efficiency of networks with partial overlap of the hearing and a complete overlap (see Fig. 10). 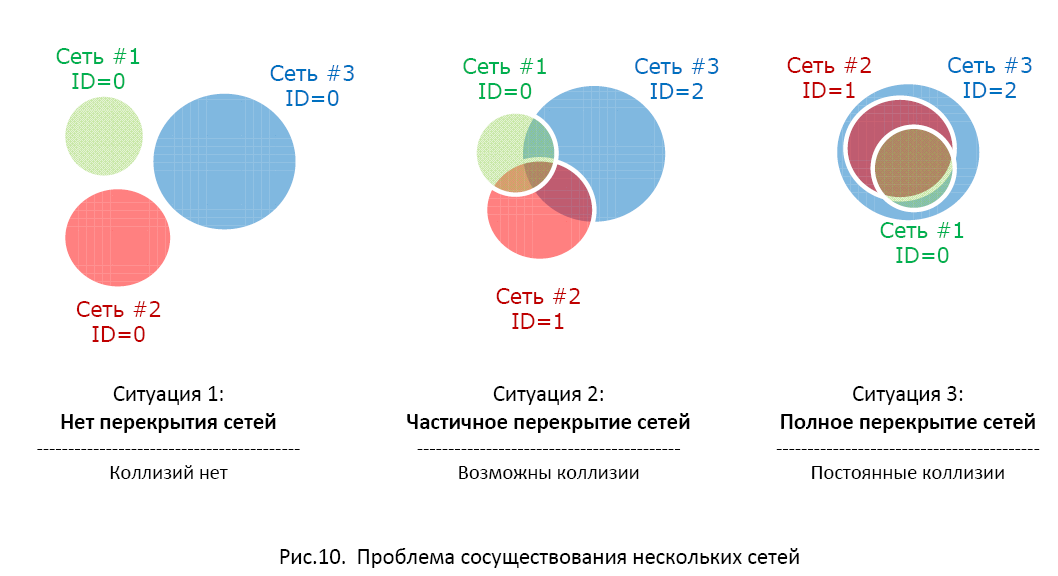 9. Scope:
The equipment used for network data collection and management. In particular, for the reading of the gas, water, electricity, heat metering, lighting control, water supply, gas, heat, ventilation and air conditioning control, transmission of alarms and build sensor networks that do not require constant data transfer, and transferring them to exit the parameter for a given range.